STRALIVIGNO IS A SUCCESS: ANDREA ARAGNO AND FEDERICA PROIETTI TRIUMPH 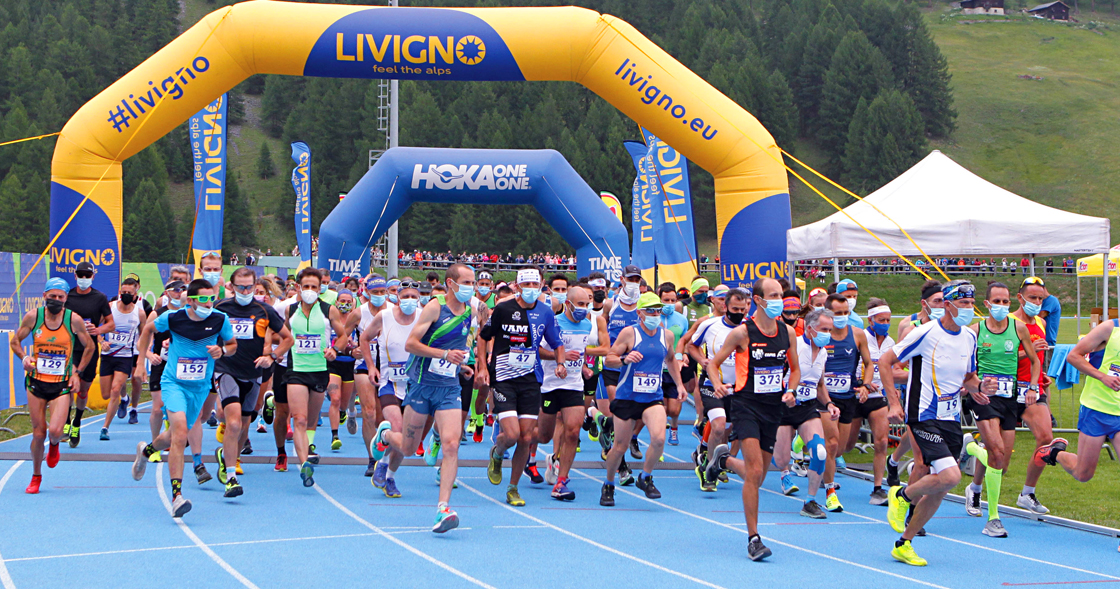 Epic race the 21st edition of the Little Tibet trail running race
Aragno wins with a huge gap, while enjoying the view
Federica Proietti get the first position in descent against the triathlete Zimoujanova
A “reduced” edition of 500 athletes to comply with anti Covid regulations

Running lovers remember July 24th for an epic story, that of Dorando Pietri, who on July 24th 1908 won the Olympic marathon, but was disqualified because he crossed exhausted the finish line supported by two judges.

A different story the one of 24th July 2021 in Livigno. The Italian Andrea Aragno won the 21st in Stralivigno with a considerable gap, running half marathon through the most beautiful scenarios of Little Tibet, but a race to remember anyway because it sanctioned his absolute superiority.

On the top of the podium also Federica Proietti, who had a pyrotechnic final run: the Italian athlete suffered the superiority of the Czech triathlete Tereza Zimoujanova for two thirds of the race, then before taking the panoramic descent towards Livigno, she gave a vigorous acceleration, so much so that it appeared all alone at the finish line, hosted inside the athletics track of the Aquagranda Center.

A grey weather certainly did not slow down the 500 runners who arrived from all over the world, a maximum number that the organizers had set themselves to comply with the Covid containment rules. There was no sun, it is true, but the beauties of Livigno were enjoyed by runners from the first to the last of the 21 kilometers.

For the men, as mentioned, Andrea Aragno immediately made his intentions clear. For about ten kilometers Fabio Gala tried to resist him, then he preferred to keep his own pace. The gap in the middle of the race has risen to 1’10 “, but Aragno has not given up and has never given himself even a moment of respite. From behind positions, the young Italian cross-country skier Lorenzo Moizi, who tried in vain to get close to Gala, climbed up with determination and stubbornness, in the end he was satisfied with the third step of the podium, a great recognition for a skier. Marked gaps for the others in line and at the foot of the podium.

The women’s race is certainly more effervescent, with Federica Proietti building her victory by saving energy in the first part, leaving the Czech Zimoujanova the illusion of an easy victory. At 12 km, her advantage was two minutes, but Federica Proietti focused on the technique andon the last climb chased her ‘prey’ until the trail started descenting towards Livigno, among the cheering of the public. The athlete from Prague probably did not expect it, and suffered the attack, trying to contain the return of the Ethiopian Banchialem Amodio, from Bergamo by adoption, who, however, finished third one minute behind the silver medal.

Very happy Aragno at the finish: “This is the first time I try to do the Stralivigno by giving my best, I never thought I could win it. Yesterday I realized that I was among the eligible candidates, but high altitude mountain running is not my strong point and I was not convinced of myself until the last moment. When I saw that I was going well in the first few kilometers, I tried to put more energy in the cycle path and the climb. Halfway through the race I was ahead by at least a minute and I continued to give my best. The last three kilometers were a real pleasure: it is a tiring journey but as always fascinating!”

Definitely exhausted at the finish line Federica Proietti: “It was my first Stralivigno, so I was very curious about the track. My friends told me so many details: the view is fantastic. Of course, I felt a little bit of the height. I am Roman but I live in Versilia, by the sea, I stayed here after a business trip. Racing is my passion, so I stayed here to compete. Livigno is a splendid town and the track is wonderful: we will meet again in 2022!”

But the Stralivigno is not only the podium race, it is the race of the many sportsmen who have faced a challenging but pleasant track, simple enthusiasts who often frequent Livigno for pleasant training at high altitude.